T‌hus far it‘s less well-known that Sandvik also has a range of screening media. However based on the positive ­customer feedback. Sandvik continues to open new doors for operators. The most recent example is the replacement of a wire screening media with its new WX7000 tensioned polyurethane screening media in a quarry in the Rhön region.

The operating hour monitor was reporting exactly 1632 hours of operation when Selim Sahin, Sales Manager Sandvik ­screening media & wear protection in central Europe, dropped by at the Bischofsheim/Germany plant of Basalt AG on 4 of October 2017 to reassure himself that his promise was ­standing the test. Sandvik‘s new WX7000 screening media had been installed in the lower deck of a screening machine at the plant in March 2017. Since then, operators have been carefully monitoring this efficient, anti-blinding, tensioned screening media which is made from wear-resistant polyurethane. So far, they are seeing excellent screening results.

The decision to change to the WX7000 screening media from the previously used wire mesh media was a result of a long and close partnership with the customer. The plant underwent extensive modernization during 2011-2012 and, following in-depth discussions with Sandvik, several Sandvik cone crushers (Sandvik CH660, Sandvik H440 and Sandvik H3000) have taken over preparation of the pre-crushed basalt in the post-crushing stages.

During discussions regarding the winter repair program, the customer mentioned he was frequently experiencing difficulties changing the media on the lower deck of the screening unit. Taking note of production conditions and required parameters, Sandvik WX7000 tensioned anti-blinding polyurethane screening media was suggested as the solution.

A specialist Sandvik screening media development team made the journey from Sweden to change the screening media on the lower deck of a 12 m² circular vibrating screen, which had been in service for a long time. They examined the material ­feeding section and evaluated the existing grading analyses. After a ­detailed investigation, they recommended an overlapping, ­longitudinally tensioned version of WX7000 for the screening deck. Finally, the hole pattern was accurately defined to avoid misplaced particles and to produce a clean target granulation, with as few undersized particles as possible.

Before the change to the WX7000 screening media the plant stood idle for at least half a day every 10 – 12 week due to the need to change the wire mesh. Various attempts to switch to harp or rubber had failed, due to quality and/or wear issues. The desired aim to reduce wear, prolong change cycles and maximize product quality could only be achieved with Sandvik WX7000. Operators have stated that the considerable increase in wear life is already having a positive effect on operating costs.

After a detailed analysis, Michael Hinz, Technical Manager of Basalt AG, has confirmed that it has already been possible to measure the direct utilization value of the process. “We are producing a very accurate 2 – 5 mm granulation with the new screening media and compared to the previous situation, the average proportion of undersized particles has dropped from 8 % to just 6 % This means that we can now supply our best-seller, 2 – 5 building material aggregate, at a significantly higher and uniform quality” explains Plant Manager Michael Deckert.

Screening results are further optimized thanks to the installation producing an almost constant material bed depth over the width of the screen mats, optimizing the separation accuracy and product quality. The plant produces quality 5 – 8 and 2 – 5 ­products from the 0 – 8 feed material in the last process stage, with a throughput of approximately 140 t/h. The separation ­accuracy of this screening media and its quality has an influence on the production output of the entire processing line. On average, approximately 100 t of this lands on the lower deck, which has been yielding clear quality improvements since March 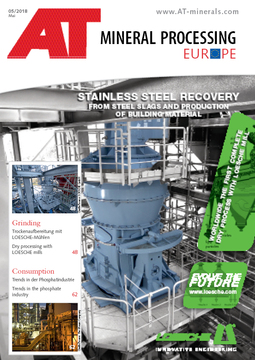 Trends in the phosphate industry

Network of the Mining and Metallurgy Regions in Europe

A cost effective and efficient investment

When it came to improving the screening efficiency of NCC Roads A/S  Nyrand Grusgrav operation in Svebölle/Denmark, the task proved easy thanks Sandviks WX7000 screening media. The anti-blinding...

With the goal of further expanding its wear protection and screen media business, Sandvik is strengthening the sales team in charge. Jürgen Börner (Fig.), who has so far headed stationary mineral...

Durability and accuracy with new screening media from Sandvik