Hitachi Construction Machinery Co., Ltd. (HCM) have announced plans to extend their worldwide production capacities in the field of large machines. In particular this applies to large hydraulic excavators and dumpers (Fig.). The company will not only extend two already existing facilities, but they will also set up new production sites at Hitachinaka City in Japan. In addition, they will invest in Indonesian and Canadian branches to increase the production capacity and efficiency at these locations also. The total capital expenditure will amount to approximately 430 million € (of that, 370 million € in Japan and 30 million € worldwide).

Due to the high global demand for resources, the sales of large machinery will probably further increase. From 2013 ­Hitachi expect an annual production of 170 large excavators with a service weight of up to 120 t, 240 large excavators with a weight of between 190 t and 800 t, and 260 dumpers with a loading capacity of 190 up to 300 t. Therefore, ­Hitachi have decided to increase their production capacities both in the fields of large machinery spare parts for the corresponding after-sales and maintenance service. The company is convinced that they will be able to improve the quality of their products and to reduce costs due to focussing on facilities near the development centre Tsuchiura Works in the prefecture Ibaraki. The extension activities at the two Japanese production sites have already been started and are expected to be finished by the end of 2012. The two new facilities will be fully commissioned by October 2013 creating more than 500 new jobs in Japan by 2015. The work at the Indonesian Cibitung Works of Hitachi Construction Machinery has also been started. The extension of the Canadian plant at Guelph/Ontario is to be completed in April 2013 to serve from there mainly the markets in North, Central and South America.

www.hitachi-c-m.com
This article appeared in 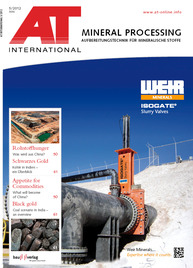 A fleet of five new Hitachi EX3600-6 excavators has been supplied by the Hitachi construction machinery dealer for Kyrgyzstan, Turkuaz Machinery, to work at high altitude in sub-zero temperatures on...

One year ago Michelin introduced a new tyre for articulated dumpers at building sites and in quarries: the MICHELIN XADN + (Fig.) of the required size 29.5 R 25. Now the French manufacturer is...

Michelin, the global tire manufacturer, will be exhibiting at the steinexpo, where they are going to present three new tires for construction machines. Two products have been optimized especially for...