Eirich will be presenting its new R16 intensive mixer and its R12W intensive mixer (Fig.) at this year’s Powtech. Both machine feature the new design which was first introduced on the R12 at the last Powtech show. The usable volume of the new mixers is either 600 l or 900 l (R16) or 250 l or 400 l (R12W), respectively, depending on the version. The design improvements that were introduced on the R12 have already delivered significant operational advantages in practical application. The arrangement of all of the machine units under a movable protective hood (R16) is particularly striking. The tilted mixing container and the protective hood on the side are the distinctive visual features of the new design. As you would expect, the new version delivers all of the performance advantages of the Eirich intensive mixer plus a few new improvements. In contrast to all other mixing systems, tool speed can be varied to obtain optimum results with each product. The machine will operate at tool speeds between 2 m/s and 40 m/s. Users can control power input into the mixer over a wide range. In conjunction with the rotating mixing container, this produces maximum mixing quality. Eirich intensive mixers can be tailored to the product at any time and it is possible to produce different products on the same mixing line. 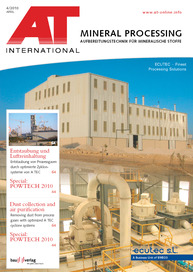 The Multifunctional Mixer for the Laboratory and Production

In many industries products are produced with a range of consistencies, e.g. dry mixes, granulates, plastic compounds or suspensions. All of these products can be prepared in one and the same mixer....

Mixing and systems technology from EIRICH in Quatar

I?n Doha/Qatar, AQUASEAL produces dry mortar pro- ducts for all phases of construction, from foundations to finishes, under the product brand name DURABUILD. The aim is to produce products that are...

Scale-up for mixing of solids

Scaling-up of mixers is a regular requirement when mixes which are developed and tested in the laboratory are needed in larger quantities or when production is to be started after completion of the...