At its gravel works in Langenbrücken, Philipp Kies KG Bad Schönborn operates two extraction machines simultaneously to assure production. A grab dredger and a suction dredger are used. After the pond had reached its maximum extraction area, the suction dredger was acquired for the purpose of re-dredging. The pipeline for material transport and the solids pump were designed such that to begin with a third of the pond area could be worked. The bucket wheel for separation of water and raw gravel was initially positioned on land. After the area had been worked in line with the installed capacities, the question was how the work area could be expanded most economically. As a pontoon from an old slewing crane was available, a clever idea for conversion was evolved. The bucket wheel, a dewatering unit and a discharge belt were to be positioned on this pontoon. Beyer GmbH completed the calculations with regard to the floating of the pontoon. These revealed that the pontoon was too small to provide a safe base. For this reason, additional pontoons were supplied and attached by Beyer.

The result after this individual modernization looks as follows: the floating bucket wheel can be positioned on any point of the existing floating belt to convey the dewatered raw gravel to the plant. Grab dredger and suction dredger operate alternately according to requirements. Now the client has chosen a similar solution for the company’s works in Huttenheim. Here, however, a completely new pontoon will be used. This was optimized with regard to the floating behaviour from the start, to minimize the weight of the pontoon and submersion and to ensure a minimum of ballast is carried. This brings valuable benefits with regard to production costs and the transfer of the pipeline to the pontoon. A new bucket wheel (operating weight 155 t) is on order. It will be combined with an existing dewatering machine which can still be used. The discharge belt will be supplied new by Beyer. As this belt is arranged crosswise on the pontoon, the bucket wheel can be integrated into the belt conveyor. The entire plant was completed during the winter break (Fig.) so that operation could be started up in spring 2011. 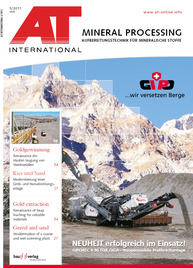 The SWO-Schiffswerft Oberelbe GmbH, based in Bad Schandau near Dresden, has supplied the complete conveying and handling equipment for a new extraction area in Babenhausen (Fig. 1). Originally an...

In Oberhergheim, in the Alsace region of France, Gravière des Elben, a subsidiary of Reinhard Waibel, a gravel works and shipping company headquartered in Gernsheim, operates a B400 floating grab...

Equipped for the next years

Ártándi Kavicsbánya Kft, a company based in Artánd/Hungary, has been running a sand and gravel extraction operation directly on the Romanian border since 1972. After the sand and gravel works had...

Damen has just shipped a fully customised Cutter Suction Dredger (CSD) 350, to Brazil. The standard dredger was adapted to meet Brazilian Naval requirements and received additional options as per...