Iron production generally follows a fixed process chain. Ore extraction in the mine is followed by the downstream processes of beneficiation, pelletizing or sintering, followed by the blast furnace or direct reduction process (Fig. 1).

In the beneficiation system, the flotation is a sorting process that assures achievement of the mineral contents necessary for the downstream processes. Each of the downstream processes imposes different requirements on the particular feed material, such as the concentrate, the pellets, etc. The sulfur content in the feed material is process-related and is specially regulated by environmental legislation.

The literature does not specify concrete sulfur limits for pelletizing. However, the pelletizing process is decisively dependent on recirculation of the process gases between the different zones of the process. In order to prevent sulfur recirculation with a consequent enrichment of sulfur in the process gas, the sulfur-carrying gas is usually discharged through chimneys at the optimum point of the process. The temperature range of the sulfur oxidation determines the position of the exhaust air duct in the pelletizing process. If the sulfur is present in different compounds in the feed material, the oxidation temperatures of those sulfur compounds can differ. This has the consequence that the pelleting process gains in complexity and can thus become uneconomical.

For the blast furnace process, the usual sulfur limit is 0.08  % [1]. Higher sulfur contents in the feed material also increase the sulfur loading of the blast furnace, which requires a higher addition of MgO and CaO for the desulfurization. However, this results in increases in the volume of slag and the coke rate, which force up the costs for desulphurization [2]. Too high a sulfur load in the blast furnace can lead to a reduced pig iron quality. Similar to the sintering process, approximately 70 % of the sulfur is introduced via the coke. Nevertheless, even though the amount of sulfur introduced in the iron carrier material is relatively small, it directly affects the pig iron quality.

For the Midrex technology as a representative of direct reduction, the requirements for the feed material are known. These stipulate a maximum sulfur content of only 0.008  % in the pellets [3]. The limiting factor here is the nickel catalyzer, which is damaged if the sulfur content is too high.

Sulfur dioxide, which is generated by the thermal processes of iron production, is a major cause of acid rain. The emissions from the iron and steel industry of China alone reached 1.76 million t in 2010, underlining the need for environmental regulations [4].

Due to the described processes and the existing environmental regulations, the sulfur has to be removed. There are two possibilities for doing this: One is to desulfurize the exhaust gas from the thermal processes. The other is to reduce the sulfur content via the iron ore beneficiation process. As a sorting process, flotation plays a fundamental role in this.

The objective of the test campaign described below was to reduce the sulfur content in an iron ore concentrate from 1.3  % to less than 0.4  %. The concentrate would thus fulfill the process and environmental requirements with regard to the downstream pelletizing plant. The stipulated recovery rate of iron was 95 % or higher.

The Hybrid Flotation cells are designed such that the feed slurry first flows through the pneumatic section and then enters the flotation column section. This process addresses the challenges arising from increasingly finer particle classes and lower raw material contents (Fig. 3).

A significant difference between the Primetals Hybrid Flotation system and conventional flotation cells is the mixture of the feed slurry with the flotation gas. In the Hybrid Flotation technology, the slurry and the gas are mixed in the chambers of the Ejector before the mixture is injected into the flotation cell. In the pneumatic section, turbulent flows possessing a high kinetic energy are generated. These ensure the generation of small gas bubbles of a desired size. On the one hand, this increases the contact rate between bubbles and very fine particles of feed material, and on the other hand it improves the adhesion of the particles to the gas bubbles. This enables the pneumatic section to float particularly fine and ultra-fine particles.

The test campaign was carried out to determine the sulfur reduction performance of Hybrid Flotation technology. To achieve the desired objective, the campaign consisted of the following two parts:

1.  General appraisal of the flotability of the iron ore, including a holistic characterization of the feed material and a variety of tests using conventional table flotation;
Identification of ­flotation reagents­ and their con­dition­­ing;
Creation of a benchmark for assessing the performance of the Hybrid Flotation cell

2. Performance of Hybrid Flotation tests to determine the ­efficiency of the technology

3.1 Characterization of the feed material

The holistic characterization of the feed material comprised a chemical analysis, a screen metal analysis and a microscopic and mineralogical analysis.

The mineralogical analysis was performed by means of X-ray diffractometry. Fig. 5 shows the results for the main minerals magnetite, hematite and pyrite.

An examination of the iron content of the chemical analysis produced the distribution of the main minerals shown in Table 2.

These pre-tests were carried out with a conventional table flotation cell. By means of these pre-tests, the following two aspects were determined:

1. The best composition of the reagents for floatation of the sulfur.

2. A benchmark for assessing the performance of the Hybrid Flotation cell.

A total of 16 pre-tests were carried out. For each pre-test, approximately 1 kg of feed material was used. Initially, the surfaces of the material were cleaned and activated in an attrition cell. The solids content was adjusted to 30 wt % for all the pre-tests. Only the flotation regime was varied.

Table 3 shows the flotation regimes of each individual pre-test. Conditioning was carried out by the addition of collector every 2 minutes.  The frother was added only once just before the start of the pre-test.  The pH-value was adjusted to the desired value by means of a regulator. In addition, Table 3 shows the achieved sulfur contents in the iron ore concentrate after the flotation test and the mass recovery (yield) of each pre-test.

The conditioning with collector D produced an average performance. The resultant sulfur content was higher than that of the best pre-test, but the mass recovery was very good. Tests #15 and #16 differ only in the application of regulator. The result which was achieved without admixture of the regulator H2SO4 was slightly better than the result of the test with the regulator. The worst sulfur contents resulted from use of collector A in conjunction with frother A. The highest mass loss was observed when using collector B in combination with frother A.

The Hybrid Flotation tests were carried out with the flotation regimes which had proved successful in the conventional pre-tests. Two flotation regimes were selected for this purpose (Table 4) due to their sulfur content and mass recovery.

A total of two Hybrid Flotation tests were carried out. Each test consisted of two consecutive passages, as shown in Fig. 6. In the first stage, the surfaces of the feed material were cleaned and activated in an attrition cell. Subsequently, the feed slurry in the fed bin was conditioned as follows:

The iron ore concentrate of the first flotation cycle corresponded to the new feed material of the second cycle and was collected in a bin. In this bin between the two cycles, post-conditioning was carried out with one addition of collector. The sulfur-bearing pyrite was directly floated and collected in an overflow bin. The final concentrate was collected in a further bin.

Based on the masses of the tests, the mineralogical recoveries and yields (mass recoveries) were calculated as follows:

The test campaign was carried out with the aim of floating the sulfur out of the iron ore concentrate. The sulfur content of the feed material was 1.3  %. The target was a reduction to less than 0.4  %, with the Fe output being at least 95  %.

For comparison with the conventional pre-tests, Table 7 presents the characteristic data of the best tests of both technologies.

The test campaign proved that Hybrid Flotation technology is an effective way of lowering the sulfur content. A reduction of the sulfur content to 0.31  % means that the produced concentrate meets the process and environmental requirements of a pelletizing plant.

Further tests will enable the amount of the used flotation reagents to be optimized and will also allow further reagents to be tested. In addition, the effects of an increase in the solids content can then be checked. 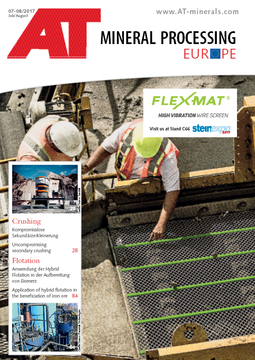 1 Introduction According to figures released by the Worldsteel Association, the production of crude steel has more than tripled since 1970 from 595 million tonnes per annum (Mta) to 1952 Mta in 2021....

I?ron ore is the main source of iron and steel and the world is made of it. The computers we use, the chairs we are sitting on, the cars we are driving with, the buildings we are working in, the...

A new mobile iron ore washing plant for Bhushan Power & Steel is delivering a substantial increase in Fe through the effective removal of alumina and silica from the feed material. Introduction of the...

The new ELEMENTRAC CS-i was developed for accurate and reliable analysis of carbon and sulfur in inorganic materials like steel, cast iron, copper, ore, cement, ceramics, or glass. It uses an...