F‌or the very first time, Czech fertilizer producer Lovochemie A.S. is grinding its ammonium sulfate using a rotor impact mill made by BHS-Sonthofen. With the help of this technique, the company has been able to replace a number of its regular process steps. The system‘s strength lies in its highly consistent grading curve and low cost of operation.

According to a report by the World Health Organization (WHO), the world‘s population will reach around 9 billion by 2050. Global demand for food is projected to rise by 70 %. The fertilizer industry plays a key role in increasing agricultural yields worldwide – and that goes for Germany‘s neighbors, too. Lovochemie A.S. is the Czech Republic‘s largest fertilizer producer.

While carrying out the construction of its new production facility for fertilizer, the company scoured the market for a machine that could achieve the desired grading curve while ensuring consistent, sustainable quality. Ideally, the system would also simplify the production process in general. The machine should also eliminate the need for additional screens to sift out oversized grains. Working in cooperation with BHS-Sonthofen, Lovochemie was inspired to try the robust grinding technology commonly used in the building industry. BHS rotor impact mills have been used in other applications, for example, in the production of gravel, and had gained a reputation as an affordable and reliable solution. However, the technique had never been used to mill ammonium sulfate, a salt composed of ammonia and sulfuric acid.

One unique challenge of this crushing process is the fact that the salt is delivered in open trucks or train cars. The salt may absorb moisture from the air during transportation and storage, increasing the likelihood of agglomeration. A reliable process would be required to break down any agglomerated material. BHS carried out a number of crushing and grinding tests with an RPM-type rotor impact mill at its technical center in Sonthofen/Germany. “The machine proved a reliable tool for grinding down the feed material to the desired size, with highly consistent results,” noted Helmut Schorn, Area Sales Manager at BHS. “The tests showed that an additional screening process was not required.”

Based on the test results, BHS recommended the use of a rotor impact mill of type RPM 1113 with an electrical connection value of 132 kW. The machine can be used to crush minerals with feeding sizes of up to 56 mm. It features a standard configuration with a housing composed of commercially-available structural steel. In addition, Lovochemie selected an optional coating for the machine‘s outer surfaces to protect the system from corrosion caused by the ammonium salt. This coating is also used in maritime applications.

The defining feature of the BHS rotor impact mill is its impeller rotor, which is the only one of its kind in the world. The feed material is loaded into the top center of the machine. When it impacts the rotor, the material is accelerated towards the outside by means of centrifugal forces; there, the horseshoe-shaped hammers engage it and throw it against the anvil ring. In the milling gap, it is crushed as a result of the impact and shearing forces. The material leaves the rotor through the gap and falls down through two outlet chutes.

This structure allows the rotor impact mill to simplify the production of fertilizer production significantly, rendering regular process steps such as repeated screening redundant. Transport processes and complex handling procedures are no longer necessary. The degree of grinding is determined by the speed of rotation and the gap size. Different grain sizes can be set by simply inserting spacers of different sizes. A large cover that can be raised hydraulically and pivoted by 360 ° allows unimpeded access to the inside of the tank.

BHS commissioned the system in April 2017. The machine crushes up to 35 metric tons of ammonium sulfate each hour. Materials with feeding sizes of up to 2 mm are crushed to a maximum grain size of 0.2 mm. The machine runs continuously 24 hours a day, 5 days a week, and fulfills all of the customer‘s needs to their complete satisfaction. The unique functional principle of the BHS rotor impact mill produces a highly consistent grading curve and an end product of excellent quality.

Lovochemie confirms yet another advantage of the BHS rotor impact mill: its quiet, low-vibration operation. The mill rotor must spin at 70 m/s to grind the ammonium sulfate to the desired size. This attractive quality is a product of the highly stable structure of the mill, combined with the monitoring of any vibrations, and played a deciding role in the procurement of the machine and the design of its steel housing. At the same time, the RPM is installed at a height of 40 m, so the design must preclude the need for a heavy or expensive steel structure.

In addition, the design principle ensures high process reliability. The machine reliably breaks down agglomerations, thereby preventing blockages from occurring. The design also prevents adhesions that might disrupt the grinding process. Any material that gathers on the machine is always loosened immediately by the constant impact of new particles. “The latest inspection of the rotor impact mill revealed no signs of wear,” says Schorn. “That means that the grading curve remained constant over a long period of time with no need to readjust the hammers. That takes the strain off our budget and the machine uses far less energy than comparable conventional systems.” 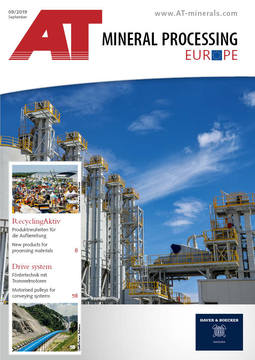 S?and manufacturer Kasprs Build Mate inaugurated a new plant for processing off-spec particles in Pune/India, in mid-2019. The centerpiece of the plant is the rotor impact mill from BHS-Sonthofen,...

Since the invention of dry mortar in the mid 1930s, this building material has found widespread use. Especially in the last 20 years, the application of mineral render/plaster and dry mortars has...

Rotor crushers for the production of sand and fine sand

Sand is a fundamental raw material component in the non-metallic minerals sector, as well as in the construction materials industry. In addition, sand is an important aggregate in concrete and mortar....