Screen enhancements include an 11 % longer bottom screen deck to extract more fines. Featuring independent screen angle adjustment, the primary screen can be independently adjusted from the secondary screen, allowing operators to optimize their throughput, screening efficiency, and product gradations. The primary screen performs as a fines extractor, whilst the secondary screen performs as a grader. Two processes on one plant, offering exceptional flexibility, excellent separation, accurate grading and massive throughput.

Sandvik offer hybrid ‘e’ drive with electric plug-in which means you can choose your most economical and efficient energy source. The QA452 provides a lower environmental impact due to reduced fuel consumption and the latest powerpack onboard offers less operating noise and low emissions. In addition, the hydraulic system has been enhanced to reduce energy wastage, and its hydraulic oil change intervals have been extended from 2000 to 4000 hours meaning up to 50 % less hydraulic oil is consumed over 10 000 hours of machine usage (subject to oil sampling). Saving time, money and lower carbon footprint.

The primary screen can also be hydraulically separated to gain better access for maintenance & screen media changes. The addition of a new oversize cross conveyor means greater oversize material extraction. This cross conveyor can also be reversed, to allow the plant to function like a two-deck screen with oversize and mid overs discharged together.

Each screen deck features end tension screen media using Sandvik’s mesh tensioning system. This means faster screen mesh tensioning and removal. The new range of Sandvik WX rubber media combines the high accuracy of wire screens, but with the durability of rubber offering up to 10 x longer wear life and up to 50 % faster installation time compared to wire mesh. In this context, the test results and calculations are to be considered as results reached under certain and controlled conditions. Having equal size panels also means the screen media is interchangeable between decks.

The QA452 comes with Sandvik’s My Fleet telemetry system & 7-year data subscription as standard. This offers 24/7 fleet management, geo-fencing and remote support. As safety is no.1 priority, several features have been included as standard to improve operator and onsite protection. Dust suppression spray bars, onboard water pump, safety pull cords and lighting mast are now fitted as standard for extra peace of mind. 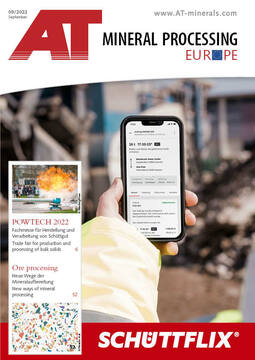 The new Terex® Finlay 873 (Fig.) is designed to work after a primary crusher or on its own as frontline screening machine. This machine is suitable for working in quarrying, mining, construction and...

Sandvik Construction Mobile Crushers and Screens will be introducing a new addition to the 341 jaw crusher range with the launch of the new QJ341+. This new model incorporates a double deck pre-screen...

The Sandvik QA331 is a state-of-the-art three-way-split screener based on the world leading Sandvik QA330. The brand new model (Fig.) now comes with improved screening capacity, and is an equally...