The successful crushing kinematics of the established stationary gyratory crushers HP4 and HP5 from Metso has been transferred to a new model that will be presented on the occasion of the steinexpo 2011. At the end of August the new gyratory crusher HP3 (Fig. 1) will be presented in Nieder-Ofleiden. As regards its performance, it should be placed bet­ween the established HP200 and HP300 from Metso.

Analogous to the proven series HP4 and HP5, this gyratory crusher renews the claim to save several crushing stages (Fig. 2) due to the maximum degree of comminution during secondary, tertiary and fine crushing, and to obtain high-quality particulate materials in one operation.

The HP3 is also distinguished by energy-economic advantages due to two crushing stages only. The savings in kWh per ton of crushed material are particularly significant as regards hard rock. With a feed opening of 200 mm, the throughputs are very promising depending on the adjustment of the crushing gap – whether it is rock, hard rock, gravel, ore or slag. The increased crusher output and the result with a convincing cubic capacity clearly show the increased net performance.

Due to the design, the HP3 has a higher centre of rotation than the established models of the series HP/X. Compared to the HP4 and HP5, the geometry is certainly similar at first sight. However, the manufacturer has improved individual components to optimize the service life of the crushing tools and the reliability of the machine. The design of both the casing and the crushing chamber has been changed. Troublesome reinforcement parts or foreign bodies, which usually can significantly delay the crushing process, are released inside the crushing chamber via double-acting bracing/removing cylinders.

A special overload protection including fixed reset point ensures that the original crushing gap is maintained – even after foreign bodies have passed. This excludes an expensive negative effect on wear parts and inserts as far as possible. The large removing stroke of the cylinders ensures a thorough discharge of the crushing chamber even with short stop times of the crusher. The tools are changed (e.g. changing from coarse to fine crushing) via a quick-change system by means of chucking wedges without using casting compounds. The control system IC7000 is absolutely sufficient for the automatic process. The operator is continuously and clearly informed due to corresponding control functions. If the individual operator clearly wants to carry out more controlling and operating himself, Metso also offer an advanced solution for control.

The screening plant, type TS 3.3 (Fig. 3), interlocked with the HP3 has been prepared for representative tests and pre­sentations with the framework of the steinexpo. For standard dry screening applications the inclination of the screen deck ranges from 25 ° at the feed end, to 20 ° in the central range and to 15 ° at the discharge end. The screening media options of the triple-deck screening plant are versatile, as usual. The decks can be quipped with modular Trellex LS screening media (HiPer Life, HiPer Flow and HiPer Clean) with the corresponding dimensions of 1.8 x 6.0 m – ideally of rubber or cast polyurethane. They avoid clogging or incrustation that may severely disturb the operation as is generally known. To simplify matters, it is also possible to provide complete or partial LS wire screen surfaces (most important, in the discharge range).

The drive is arranged above the centre of mass of the screen and generates elliptic circular vibrations in the feed and discharge range so as to vary the angle of throw. The corresponding eccentric drives are completely enclosed and operate very reliably in all applications. ­Leakages or contaminations, as they occur with oil-lubricated drives, should not be expected. Metso offer automatic grease lubrication as an option so as to be able to dispense with the usual lubrication intervals, i.e. every 50 or 200 hours. The entire screening concept has been designed in such a way so as to operate efficiently and trouble-free as far as possible.

The feed and discharge ranges are lined with screwed wear protection components, which are part of the standard equipment. The side walls and cross girders do not have any welds and are connected with each other by means of ­huck bolts. Injection systems, adequate dust protection hoods and many other options are available. If the banana screen is used in a salty atmosphere or environment, it is recommended to chose the galvanized design. 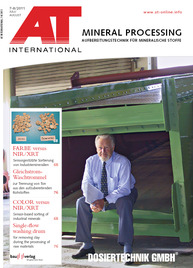 The Metso SuperiorTM MKIII provides a significant performance leap in gyratory crushing. Based on Metso's crushing technology, the MKIII is a high-speed primary gyratory crusher to deliver up to 30 %...

The new Lokotrack LT220D from Metso is a fully mobile combined plant, which is equipped with an efficient gyratory crusher and an effective triple-deck screen. In addition to the space-saving...

Metso and ZAO Russian Copper Company (RMK) have signed a contract to supply crushing, screening and grinding equipment  as well as on-site services for six years  to the first plant of the new...